Pride Month is as much about protesting continued attacks against LGBTQIA+ rights as it is about celebrating the LGBTQIA+ community.

If you research the history of the Stonewall Riot and early pride marches, you’ll find that activism was often led by transgender folx, particularly trans women of color.

So, in this second part of this two-part series about LGBTQIA+ programming, I will offer suggestions for programs that honor the contributions of trans folx to LGBTQIA+ history and call attention to modern trans-specific issues. (You can check out part one, which offers broader lGBTQIA+ programming ideas, here.) 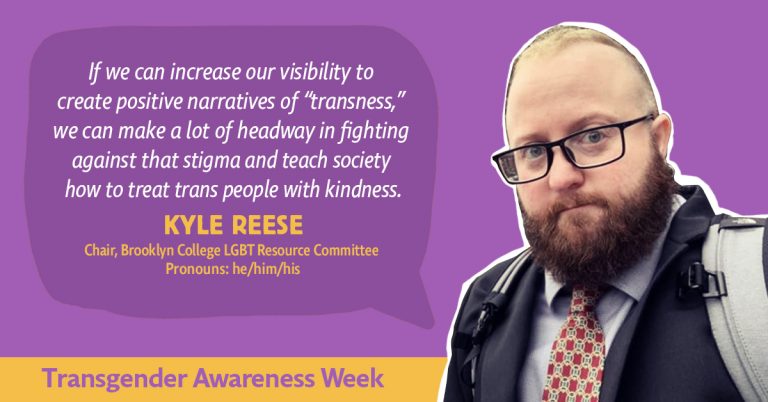 photo from The City University of New York

One program idea is to host a film screening, followed by a discussion. It could be a film that was created by a trans person, has trans people in its cast, and/or is about trans people and issues. You can find a list of 21 such films here.

If you choose to facilitate a discussion afterward, here are some articles with tips for planning an in-person or virtual event. Also, check out this list of discussion questions from Teach With Movies.

Perhaps you and your students like the idea of a film screening but can’t dedicate two hours to it or can’t afford the licensing fee. With a TED Circle, you could watch one or multiple TED Talks together and discuss the video afterward. TED even provides questions for certain videos. You could use a video from this playlist curated by the TED staff or searching “transgender” on the TED website.

You could host a panel of trans-identifying students, faculty, staff, or members of the local community. Research suggests that personal storytelling helps counter implicit bias and move participants towards a deeper understanding of social identities, power, and privilege.

The New Haven Pride Center’s website has some great examples of topics from their panel series. If you are unable to schedule people for a live panel, you could show a “panel” of videos instead, such as those made by StyleLikeU and Tinder.

It’s important to compensate panel members. Sharing their stories for the sake of educating cisgender people requires significant emotional labor — which can be defined as putting energy into dealing with something that could be mentally taxing or emotionally difficult. Someone with an oppressed identity should not be expected to provide free emotional labor for the benefit of those with privileged identities.

Transgender Day of Remembrance (TDoR) memorializes people who were victims of violence based on anti-trans hatred.

According to Gwendolyn Smith, a transgender activist and writer who co-founded TDoR with other activists in San Francisco, this memorial serves several purposes:

Further, Gwendolyn has this to say about TDoR:

Although TDoR events frequently involve a candlelight vigil, there is no standard format. Past TDoR events on college campuses have included roundtable discussions with local activists and area politicians, a dramatic presentation of hundreds of shoes or transgender pride flags on a campus quad, art displays, and poetry readings.

TDoR can bring out some intense emotions for attendees, so it’s a good idea to have staff from the counseling center available for support.

You can find a full event planning guide here and the names of victims of anti-trans violence here.

A related event is Transgender Day of Visability (TDoV), which is observed annually on March 31 to celebrate the accomplishments and lives of trans people. It was created by activist Rachel Crandall as a way to center trans joy, in contrast to the somber tone of TDoR. You can read an excellent article with advice for celebrating TDoV on your campus here.

International Pronouns Day is on the third Wednesday of October and seeks to make respecting, sharing, and educating communities about personal pronouns more commonplace.

Sharing pronouns is a first step toward respecting people’s gender identity, working against cisnormativity, and creating a more welcoming space for people of all genders. 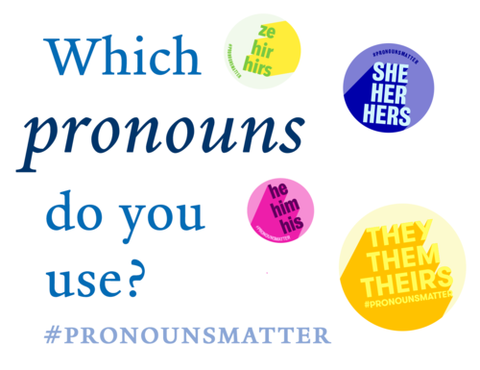 An easy way to educate students about the importance of sharing pronouns is through tabeling and social media.

Check out these resources to inspire your tabling and social media posts:

It would also be helpful to have directions on how students can change their chosen names and pronouns in your institution’s IT system.

A drag show is a form of entertainment that gets its name from drag performers. A drag queen is someone (usually a cisgender male) who dresses and acts in a feminine manner, while a drag king is someone (usually a cisgender female) who dresses and acts in a masculine manner. Anyone — regardless of their gender identity, gender expression, or sexual orientation — can dress up and perform in any style of drag.

A drag show is a great way to challenge people’s ideas about the gender binary, gender expression, and binary beauty. Drag performances provide a space to celebrate every body type while showing off performers’ creative expressions through their costumes, makeup, and artistic routines.

A classic drag show is similar to a talent show. Students, contracted performers, or a mix of the two might sing, lip-sync, dance, do stand-up comedy, or perform any other sort of talent. If you don’t have a big budget for contracting professional drag performers, consider hiring one as the MC and giving students more time on the stage.

Here are some things to consider when organizing a drag show:

Drag brunches are an alternative sort of program, with a different, more laid-back atmosphere than drag shows. In addition to the food, drag brunches feature drag performers doing similar forms of entertainment as those in drag shows.

Drag BINGO has also become a popular activity. It combines the classic fun of BINGO with the sassy MC style of a drag performer. BINGO is already pretty popular on college campuses, so perhaps you can make a regularly scheduled BINGO into a drag-themed game. It has the potential to attract both BINGO and drag fans!

The benefits of formal mentoring programs have been well documented by research. Your institution could benefit from starting a peer mentoring program that pairs mentors and mentees who both identify as LGBTQIA+.

Before proceeding, you should evaluate if such a program is feasible. Ask yourself these questions:

How you match mentors and mentees will depend on how many people want to be involved in the program. ad for the University of Tennesse’s LGBTQ+ mentorship program

If there are a dozen or so students interested in participating in the program, you could organize a “meet and match” program. Mentors and mentees would meet in person or through video conferencing and participate in a speed dating-style event.

Provide a cheat sheet of questions for mentees to ask potential mentors. Mentors can certainly ask their own questions, but the mentee should drive the conversation because they are the intended beneficiary of the program. Mentees might ask potential mentors why they want to be a mentor, what their values are, and what they expect from a mentee.

Afterward, everyone would submit a form in which they rank who they would like to be paired with. A staff member could then match people who ranked each other in the top half of each other’s list. As a follow-up event, you could host a reveal party for everyone to find out who they were matched with.

If there are too many participants to make speed-dating feasible, you could send out surveys to all participants and match people based on how they’ve answered questions that are similar to the ones that would be asked at the event.

Every effort should be made to match up participants who share a sexual orientation and/or gender identity, but make it clear early on to students that this may not be possible depending on the demographics of who signs up.

Choosing to be a mentor is a big commitment, so you should provide peer mentors with some formal training, or at least some resources to review, like the ones listed below:

It is especially important to provide training on cultural competency and intersectionality. For example, a white gay man who is mentoring a Black lesbian women needs to understand how his white, male privileges create blind spots for him when he is sharing advice based on his life experiences.

In addition to informal meetups that mentors and mentees arrange around each pair’s schedules, consider organizing some structured activities for the whole group to partake in — such as mini-golf, laser tag, or escape rooms.

If your students like to attend guest lectures on campus, consider bringing scholars and community activists to speak about gender, sexuality, or queer studies. The Out To Lunch Lecture Series at the University of Connecticut is a strong example.

Before you brainstorm potential speakers, set aside a budget for honorariums. Speakers are sharing with you their expertise and, thus, they should be compensated, even if they are staff or faculty at your institution. Being honest about the compensation you can offer at the beginning of your conversation can help you build goodwill with potential speakers.

Be sure to invite speakers who reflect a diversity of races, sexualities, genders, occupations, and other life experiences.

Social media content can be paired with any of the programs I’ve already mentioned. In addition to the resources that are linked throughout this article, here are some videos, articles, and other content ideas to share with students through social media:

Before posting any content, I suggest reviewing this inclusive language guide, this LGBTQIA+ glossary, and the Trans Language Primer to make sure that you are up-to-date on how to respectfully talk to and about the LGBTQIA+ community.

Programs like the ones I’ve described here and in my earlier post should be only a part of a more comprehensive, institution-wide commitment toward fostering LGBTQIA+ belonging. One way to benchmark your progress is by taking part in the Campus Pride Index.

Review these research-based resources so that you can lead your institution toward increased  LGBTQIA+ solidarity:

How else does your campus celebrate, affirm, and support LGBTQIA+ students all year long? Connect with us on Twitter @HelloPresence and @JustinTerlisner.

About the author: Justin Terlisner is a student affairs professional who focuses on helping students thrive through dynamic leadership education and inclusive supervision practices. When not writing curriculum or working with students, you’ll find him enjoying a book, hiking, or baking. Learn how we can help get your students involved.